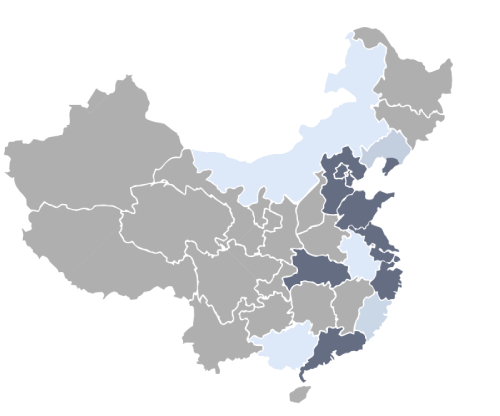 Next to being the center of the Chinese government, the city of Beijing also hosts a variety of research institutes and head offices of big state-owned energy developers. These companies increasingly shift their investments towards the hydrogen domain.

In June 2020, Shanghai positioned first in the China ‘hydrogen urban competitiveness ranking’, which indicates which cities have the best hydrogen infrastructure, policies and commercial environment. It is the combination of government support, enterprises, universities, and 20 years of R&D that put Shanghai in the lead. Opportunities are not limited to Shanghai, but cover the whole Yangtze River Delta. This region hosts China's first R&D and demonstration areas for hydrogen Fuel Cell Vehicles FCVs, great hydrogen production potential and China’s largest chemical park.

General introduction on the hydrogen sector in the South China region

Guangdong is the region in which most hydrogen companies are registered. The developments of hydrogen policies and projects in Guangdong are among the most advanced and mature in the country, mainly due to the much earlier start compared to other cities and regions. Within the Guangdong region there are three cities famous for their hydrogen developments. Foshan, Guangzhou and Maoming. Several Dutch Dutch companies are already active in this region, such as NedStack, Teesing and KIWA SHV and Shell; the latter three also having established offices here.

General introduction on the hydrogen sector in Dalian
The economy of Dalian is heavily dependent on the oil and petrochemical industry. Local authorities have ambitious plans to develop a separate hydrogen economy. The development of the local hydrogen sector in the responsibility of the Dalian Development and Reform Commission. In 2021, Dalian counts 13 hydrogen related projects under construction. Dalian has 2 operational fueling stations, and another 2 are being built. Furthermore, 7 hydrogen related industrial zones are under construction.

Developing the hydrogen sector in Dalian has the following strengths:

The economy of Dalian is heavily dependent on the oil and

petrochemical industry. Local authorities have ambitious plans to develop a

separate hydrogen economy. The development of the local hydrogen sector

is the responsibility of the Dalian Development and Reform Commission.

of the leading industries in Dalian. Local petrochemical companies produce roughly 700’000 – 800’000 tons hydrogen by-product per year. The manufacturing capability makes the price of local hydrogen cheaper compared to other cities in China.

• Support from local government. To increase the support for the development of the hydrogen energy industry, the Dalian government will invest 1 billion CNY in the coming five years. Government subsidies will be granted to hydrogen-energy vehicles, ships, key components, fueling stations, etc.

General introduction on the hydrogen sector in Shandong

energy producer and consumer. Shandong has rich hydrogen resources. The

output of hydrogen in Shandong is about 2.6 million tons per year,

Shandong attaches great importance to the development of the hydrogen

medium- and long-term development plan on hydrogen energy, and total 9

local relevant standards have been deployed. In April 2021, the Ministry of

framework agreement on the construction of demonstrative projects of

hydrogen technology, which aims to substantially widening the application

Full coverage to hydrogen chain: Shandong covers the full range of hydrogen chain from production, storage, transportation, and application. There are over 50 key enterprises and research institutes dedicated in hydrogen, fuel cell technology and vehicles in Shandong, and the National Fuel Cell Innovation Center is newly established in Weifang, Shandong.