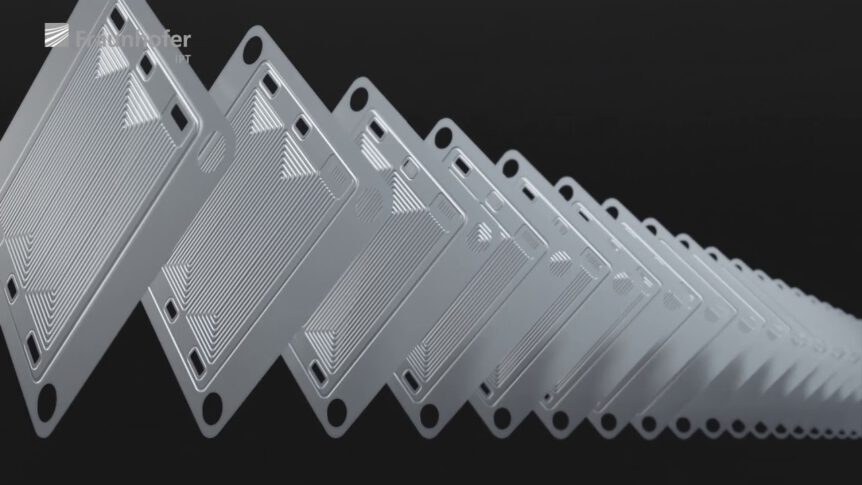 Shanghai Zhizhen New Energy Company (Shanghai Zhizhen) announced the launch of a new product, carbon-coated metal bipolar plates, which will reduce the cost of electrodes by 40%-50% while extending the expected life of metal plate fuel cell engines to over 20,000 hours. Soon, the new technology will touch the whole hydrogen fuel cell industry and reduce the cost with mass production capacity of one million pieces per year.

Toyota’s carbon coating is based on titanium metal plates, and carbon coating on titanium plates eliminates the need to consider the corrosion resistance of the carbon material itself. However, in terms of material cost, stainless steel pole plates are more suitable for large-scale promotion of fuel cell vehicles.

The company’s R&D team informed the China Orange Group Research Institute, that through a large number of molecular dynamics simulations, it was found that the introduction of nanocrystalline structures with specific crystalline orientation in the amorphous carbon coating can enhance the denseness of the coating and improve the resistance to corrosion. Comparisons tests show that the developed carbon coating material exceeds the performance of precious metals.

The physical properties of metal and carbon are significantly different, and it is difficult to apply carbon coatings directly on metal materials. To overcome this difficulty, the transition of coating materials from metal to non-metal is achieved by interlayer gradient matching of different elements. Also relying on the developed enhanced plasma deposition technology, the chemical bonding between the transition metal and carbon material is strengthened, which greatly improves the bonding between the carbon coating and the metal bipolar plate.

Since 2019, client companies have been assembling stainless steel carbon-coated bipolar plates provided by Shanghai Zhizhen into fuel cells for durability testing, which has now been conducted for over 10,000 hours. According to the actual test results, the corrosion resistance problem of carbon coating on metal bipolar plates has been successfully solved and meets the performance of design life of over 20,000 hours.

Based on the accumulation of vacuum coating technology, Shanghai Zhizhen successfully developed an enhanced plasma deposition solution, which increased the deposition rate of carbon material by 10 times and laid the foundation for the development of continuous coating lines. Meanwhile, a closed-loop plasma control system was introduced to achieve a more stable process and ensure more consistent and reliable products.

3. Taking over the car industry

Among the “three vertical and three horizontal” development routes of China’s new energy vehicles, fuel cell vehicles are the “one vertical” that is the latest to be developed, but also the “one vertical” that is given the most expectations. Fuel cell vehicles are responsible for overtaking China’s auto industry. On this track, China’s technology, research and development and commercialization applications can be said to be in sync with the international pace, with the first 500 fuel cell logistics vehicles on the road in Shanghai at the end of 2017, which is still the largest batch of fuel cell vehicle deployment in the world.

In September 2020, five ministries and commissions issued the Notice on the Demonstration and Application of Fuel Cell Vehicles, clearly guiding the industry toward high-power and heavy-duty development. Metal bipolar plate stacks are rapidly gaining market acceptance due to their higher power density per unit volume and weight, which is in line with the direction of end-use scenario demand, but the life time issue has been plaguing metal bipolar plate manufacturers.

The new high-end carbon coating technology, which extends the product life from thousands of hours to more than 20,000 hours, has surpassed the highest threshold of competitiveness of metal bipolar plate stacks, and has also reduced the cost of plates by half, which has helped to achieve the overtaking. According to the “Energy Saving and New Energy Vehicle Technology Roadmap 2.0”, the number of hydrogen fuel cell vehicles in China will reach about 100,000 by 2025.