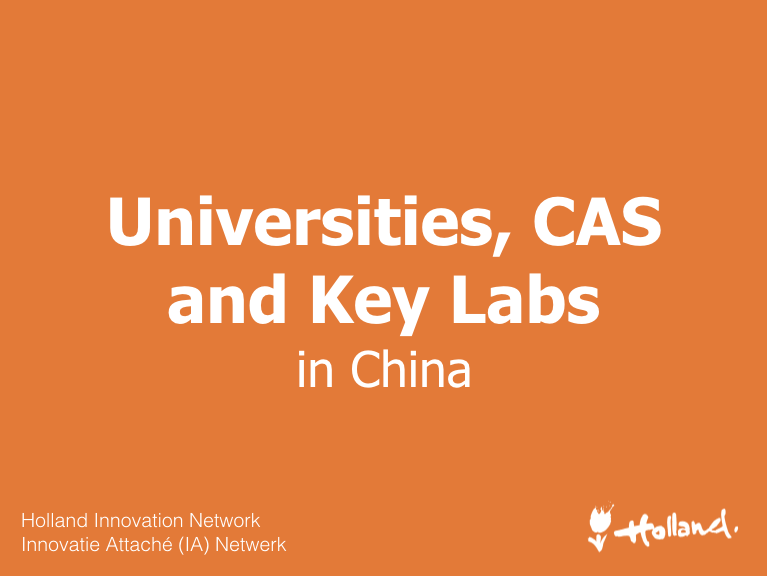 When searching for your ideal research and science cooperation partner in China, you will probably encounter many universities, Chinese Academies of Sciences (CAS) and (key) laboratories related to your sector.

Their websites show information related the amount of (under) graduates and members of CAS/ CAE, while also mentioning National Key Basic Research Programs, National Key Labs, other kind of labs, engineering centres, projects 985/ 973, among others.

This article will give an idea about the scientific system in China, and insights how to read such information. Firstly, information will be provided about universities, CAS institutes and laboratories in China. Secondly, the most important scientific programs will be highlighted. Followed by an overview of a top academic career for Chinese scientists, including individual acknowledgements.

There are more than 2600 universities and colleges in China. In order to find the most prestigious ones, you can look for various lists and programs in which the best universities are selected. Although the overall criteria are unclear, it’s expected that they have qualified research facilities and acknowledged scientists.

Throughout the years China published various university lists. In 1959, a list with National Key Universities referred to universities recognized as prestigious and which received high-level support from the Central government of China. This list started with 16 universities. In 1995, China started Project 211. Project 211 intended to raise the education and research standards of about 100 high-level universities, followed by Project 985 in 1998. Project 985endeavoured to select and prepare nearly 40 research-intensive universities for future international impact. Through Project 985, an official alliance of nine elite and prestigious universities was initiated, named the C9 League, comparable to the UK’s Russel Group or the US’ Ivy League.

The Double First Class University Plan (also named Double Top University Plan) recently “replaced” these projects. The plan is implemented by the Ministry of Education (MoE) in China since 2017, to create world-class universities and disciplines by the end of 2050. The full list is published in September 2017, including 36 universities Class A (which are relatively more prestigious), 6 universities Class B and 95 institutions (including the 42 Class A and B universities) designated to develop world-class courses. See the list here. The list can be used to select the best universities related to your research focus.

To find the best universities on research within your field, it is also recommended to conduct information via the CWTS Leiden Ranking, available via this website. Some guidelines on how to use it: select your interest at “Field”, include China at “Region/ country”, put a minimum output of 500 publications, and order by PP (10%). A list with potential cooperation partners will appear.

The Chinese Academy of Sciences (中国科学院) is the national academy for the natural sciences in China. CAS holds 104 research institutes, with a staff of 67,900 people, including about 56,000 professional researchers. Of these, approximately 22,800 are research professors or associate professors. Website: http://english.cas.cn

Becoming an Academician of the Academy represents the highest level of national honor for Chinese scientists.

A list of the current 104 research institutes is available here. Furthermore, there are 12 branch academies. You can find such on page 7-27 via the following link. CAS also runs three universities, namely the University of Science and Technology of China (USTC), the University of the Chinese Academy of Sciences (UCAS) and the relatively new ShanghaiTech University.

CAS is home to over 85 percent of China’s large-scale science facilities. CAS is e.g. developing the China Spallation Neutron Source (CSNS) and the 500-meter Aperture Spherical Telescope (FAST). The academy also hosts the Chinese Ecosystem Research Network (CERN), which has about 50 core field stations and 100 other stations across the country. CERN conducts monitoring and research involving ecological systems and the environment.

The national scientific and academic organizations affiliated to the China Association for Science and Technology are also important forces to scientific and technological research since they have particularly a strong network.

Within universities and CAS institutes, there are many different laboratories.

These labs are financed differently (infrastructure, personnel costs, etc, but not necessarily the research work itself) by the Central government (MOST, MoE, MIIT etc.), local governments, CAS, hosting universities (therefore by MoE) or by mixed funding including industry. Also the level of excellence differs.

National laboratories and state key labs receive the largest amount of money and are considered to be superior.

National laboratories, only few in number, are set up to deal with broad research topics/ large-scale scientific programs. They are mainly operated through cooperation between a single university and CAS institute, on the basis of various state key labs, CAS key labs and key labs of the Ministry of Education.

These national laboratories are financed by the Ministry of Science and Technology (MOST), including big investments (larger amounts compared to state key labs).

An overview of the current national laboratories is available below. There are more in the application phase, not yet formally approved.

State Key Labs (SKLs) represent the best research groups in China for a specific topic (only one SKL per research topic), especially for basic research. Its premise is to enable the country’s most accomplished scientists and scholars to conduct pioneering research to further support China’s technological and economic development.

In 1984 the plan to create SKLs was initiated by the Chinese State Planning Commission (currently named National Development Reform Commission (NDRC)). In 1998, the implementation was handed over to and financed by the Ministry of Science and Technology (MOST). Later on also the Chinese National Natural Science Foundation (NSFC) got involved in the evaluation of the academic performance of the SKLs.

In 2015 there were in total 255 SKLs, with a total budget of 4 billion RMB, mainly based in universities (132) and CAS (78). Others are with ministries and in companies. More information about SKLs is available here (in Chinese).

All above mentioned labs focus on scientific fundamental research.

More applied research is appointed to the Chinese National Engineering Research Centres (CNERC). There are more than 200 CNERCs in all major engineering areas, established by the Ministry of Science and Technology (MOST). The CNERCs focus on providing engineering research and consultancy support to industries, such as enhancing core competency on the transformation of technology achievements for productivity; promoting a higher level of maturity, compatibility, and engineering standards in technology results; and providing technological innovation support for national socioeconomic development.

Following above explanation of universities, CAS institutes and laboratories in China, the next part will focus on scientific programs in China.

China formulated a series of general programs for scientific and technological research and development. The overview of scientific programs constantly changes due to reforms and new selections. However the most important ones will be highlighted, namely the National Science and Technology Major Project and National Key R&D Program. The latter includes the 863 and 973 Programs, also named State High-Tech Development Plan and National (Key) Basic Research Program respectively.

A well-known example is the C919 project. More information about other projects is available here (in Chinese).

In December 2015 the Ministry of Science and Technology started a reform towards a National Key R&D Program. Programs such as the 863 and 973 Program are being merged in this new program.

The 863 Program was launched in March 1986, by the Ministry of Science and Technology. The program addresses and stimulates a number of cutting-edge high-tech issues of strategic importance. More information is available here.

The 973 Program was launched in 1997 by the Ministry of Science and Technology. It calls for the development of science and technology in various fields. More information is available here.

The Ministry started a new webpage, integrating all information related to the National Key R&D Program. You can find such here (in Chinese).

There are also other, currently less relevant, scientific projects.

In 1982 the Key Technologies R&D Program was launched. It’s oriented towards national economic construction, aiming to solve the key and comprehensive problems directing the national economic and social development covering agriculture, electronic information, energy resources, transportation, materials, resources exploration, environmental protection, medical and health care, among other fields. In 1986 the Spark Program was launched, focusing on revitalizing rural economy through science and technology and to popularize science and technology in rural areas. The Torch Program was launched in 1988. It calls for the development of high-tech industries, including high-tech industrial development zones around China. The program mainly includes projects in new technological fields, such as new materials, biotechnology, electronic information, integrative mechanical-electrical technology and advances and energy-saving technology.

The last part of this article focuses on individual researcher.

As individual researcher you can receive various acknowledgements to highlight your expertise. National Distinguished Experts before the age of 40 can be selected for the (Youth) Thousand Talents Program, which is actually not limited to 1,000 scientists. This program was launched in 2008, for which – on average – scientists between the age of 32-36 are being selected. More information is available here. Before the age of 45, experts can be selected to become a Distinguished Young Scholar. In 1994, such is implemented by the Natural Science Foundation of China (NSFC). More information is available here. The highest honour award is to become an Academician, member of fellow CAS. Currently there are around 800 scholars with such a title in China. Elections for new academicians are held every two years. An overview is available here (in Chinese).