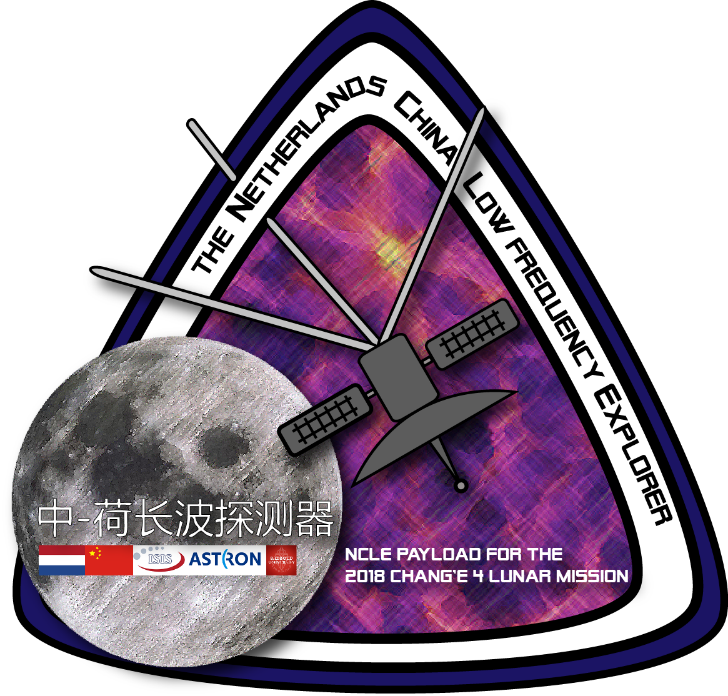 A Dutch designed and Dutch made radio astronomy payload named “Netherlands China Low-frequency Explorer” (NCLE) is ready to board on China’s latest Lunar exploration mission, Chang’e-4, and starts its journey to the back side of the Moon upcoming May. At the moon’s dark side, NCLE will explore the radio sky at very long wavelengths (i.e. at low frequencies below ~30 MHz). This includes the study of radio emission from the Earth, the Sun, the large planets in the solar system and the Milky Way.

NCLE is a cooperation project agreed to by the governments of China and the Netherlands in 2016.  The instrument was built in just a bit more than two years with joint efforts of Dutch scientists and engineers. Dr. Marc Klein Wolt, Managing Director of Radboud Radio Lab and Assistant Professor, Department of Astrophysics Research Institute for Mathematics, Astrophysics and Particle Physics, Radboud University Nijmegen, the Netherlands is Dutch PI of this project. He is expecting new astrophysical observational techniques and radio telescopes in this wavelength range in space, addressing topics such as long baseline interferometry, the investigation of faint signals from the early cosmos, and the detection of transient radio signals.

The dark side of the moon is superb for astronomical observation since noisy radio signals from the earth are blocked. But a journey there is not easy. Up to now, tougher terrain at the back side and technical difficulty in direct communication with the earth has stopped any country from landing there. The only picture of moon’s backside is taken by a Russian mission in 1959. Decades later in 2018, China is ready to face the challenge. If everything goes as planned, in a month time, China will make a soft landing at the back side of moon for the first time in human history.

Named after ancient fairytale character Chang’e, China’s moon mission signals its growing strength in space exploration.  Ultimate goal of the Chang’e mission is human landing on the moon by around 2030. So far China has succeeded in its first three endeavors, including two moon orbiters in 2007 and 2010 and a rover in 2013. Chang’e-4 is the fourth of the series and technically a complicated and difficult one.

On the occasion of the 3rd National Space Day, a day picked by President Xi Jinping for China to celebrate its accomplishments in space adventures, CNSA, the Chinese space authority, unveiled details of  Chang’e-4 mission. The mission includes two satellites. A relay satellite, named Que Qiao (in Chinese: 鹊桥, another fairy tale character), will head for the second Earth-Moon Lagrangian point, or EML-2, about 37,000 miles above the far side of the Moon first, fulfilling the task of  establishment of an earth-moon communication link. Once the link is built, a second satellite will be launched six-months later to deploy a rover and lander, on the South Pole-Aitken basin, the single largest dent on the Moon’s surface.

Besides Que Qiao’s primary task to keep Chang’e 4 rover and lander connected with their ground station, the communication satellite also carries two micro-satellites for long-wave length observation. The two micro-satellite were named Longjiang 1 and Longjiang 2, both developed by Harbin Institute of Technology, China’s first and strongest space education and research institute. In addition, China opened the Chang’e 4 mission to international cooperation. Together with NCLE, instruments developed by Germany, Sweden and Saudi Arabia are also accepted on the Chang’e 4 Mission to do space science.

Illustration of the CHANG’E 4 Mission

Talking about space science, Chinese scientist, Mr.Wang Chi of the National Space Science Centre, Chinese Academy of Sciences (CAS) admits that China has a long way to go to catch up with other advanced space nations. Up to 2017, America has launched more than 400 satellites for science purposes. ESA launched around 50 while China made 9 launches only, including 2 for the Double Star mission in close cooperation with ESA.

Realizing the gap with advanced space powers, space science started to become more and more important in the planning of the Chinese space programme. Through the “Strategic Priority Program on Space Science” led by CAS, aseries of space science missions are planned and implemented. On its own and through international cooperation, China is determined to contribute to “human understanding of the universe and planet earth, seeking new discoveries and new breakthroughs in space science”[1]

Through the Strategic Priority Programme, China is able to join the international community in the study of black holes and neutron stars and in search of dark matter particles. It also enabled microgravity research and examination of Sun-Earth space weather system.  Paired with ESA’s Cluster programme, China has completed the Double Star Programme focusing on solar wind.

China’s space station – Tiangong – to be completed by 2022, is designed mainly for space sciences. With two science modules joined together by a connecting service module, Tiangong is said to have similar capacity to perform space science as the International Space Station. China has announced that Tiangong will be developed into “Space Lab” open to experiments and astronauts from all UN member states, specifically to developing countries.

Looking into the future, space science in China will be strengthened significantly by a number of new satellites under the Strategic Priority Programme of CAS to be launched around 2020. This would include a cooperative mission with Europe called “SMILE” to study the interaction between the solar wind and the Earth magnetosphere. An “Einstein-Probe” puts focus on searching for X-rays emitting celestial bodies and high-energy radiation from black holes. The Programme also foresees a project to search for electromagnetic signals associated with gravitational waves and an earth observation mission focusing on water cycle observation.

The Chinese space missions often offers the international community unique opportunities to carry out joint scientific exploration. The Netherlands has secured one of such chances. As China strengthen its science ability, it would become a strategic and competitive partner for the advanced space nations.